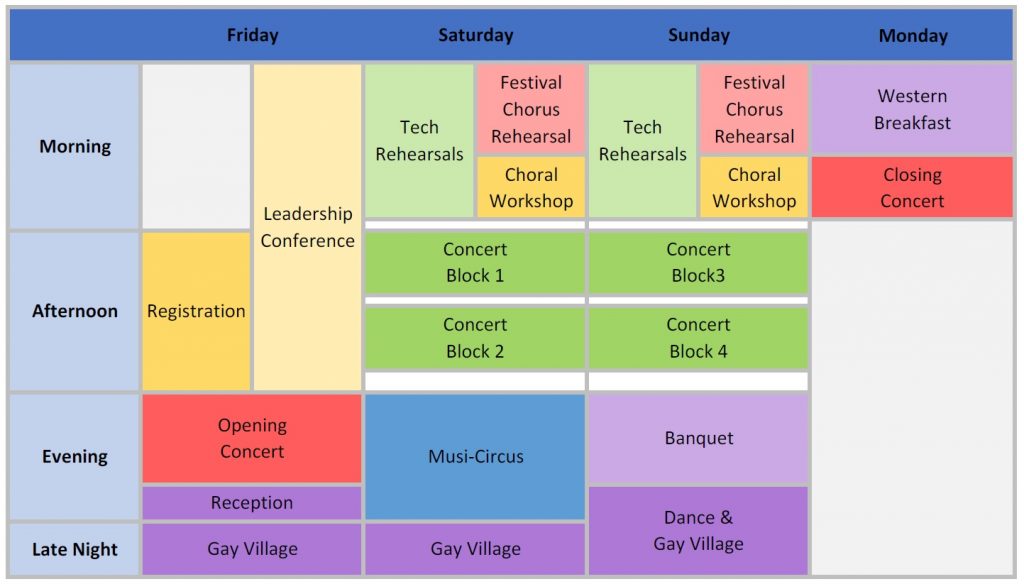 The festival kicks off with an opening ceremony and concert on Friday night, marking the 20th anniversary of Unison Festival. Host choirs Calgary Men’s Chorus, One Voice Chorus, and the BarberEllas take the stage to welcome everyone to Calgary. To close the concert, they are joined by singers from local youth choirs, forming a massed choir over 150 voices strong. Following the concert, delegates get a chance to mingle over finger foods and cocktails in the lobby of the Bella Concert Hall.

The Calgary festival features a single SATB Festival Chorus. The Festival Chorus will be a blockbuster event in its own right – 200 voices or more performing with orchestra at the closing concert in the Bella Concert Hall.  Learn more

On Saturday or Sunday, start your day with a dynamic workshop led by Edmonton conductor and clinician Scott Leithead. The same workshop will run both days, so everyone has a chance to take part.  Learn more

The concert blocks are the heart of every Unison Festival. Participating choirs and small ensembles perform on Saturday and Sunday. Be prepared to laugh, to cry – in short, to be moved as groups ranging from 10 to 100 singers take the stage to showcase what they do best.

On Saturday evening, delegates take to the campus streets for an indoor street festival of music and arts. Performances will run simultaneously in three campus theatres, featuring local artists and members of our Unison family.  Learn more

We will be finishing the Unison 2018 Festival with a bang, and you won’t want to miss it! The festival wraps up with a spectacular send-off concert in the Bella Concert Hall. This final official event of the Festival weekend will include the announcement of the next Unison host city, a special performance by the acclaimed Calgary-based Spiritus Chamber Choir, and a concert performance from the 200-voice SATB Festival Chorus accompanied by orchestra.

Throughout the weekend, delegates get a chance to unwind together at a variety of social events, including late-night karaoke in the bar, a banquet and dance party on Sunday night, and a Western-style breakfast on Monday morning. Watch for more details as the festival approaches!

Choir leaders have the opportunity to network and learn from each other at a leadership conference on Friday.